cadavre 1 from yaniv schonfeld on Myspace.

cadavre 2 from yaniv schonfeld on Myspace.

" Ensuing " is the result of a research around sound and movement, involving 2 dancers and 5 musicians.
Focusing on sound being a consequence of movement, the collaboration explored different relations to sound from musicians and dancers points of view. Throughout the process the symbol of the Ouroboros inspired the work by its representation of self reflexivity, in a sense of something constantly re-creating itself, as cycles that begins anew as soon as it ends.

A corpse, also called a cadaver in medical, literary, and legal usage or when intended for dissection, is a dead human body.[1][2] The dead body of an animal is called a carcass, but this is also sometimes used to refer to the body of a human.[3] (Wikipedia 2012) 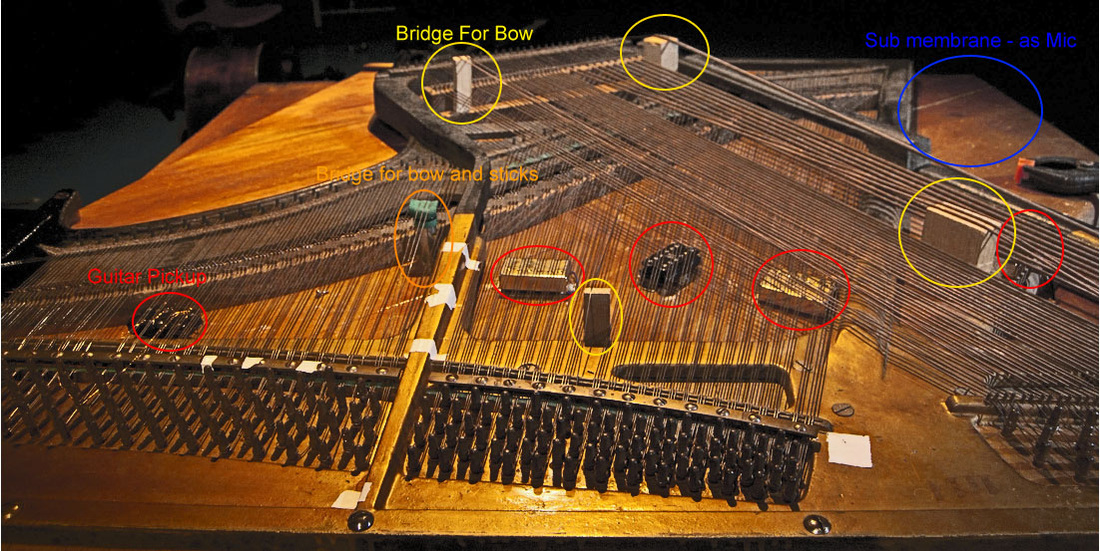 Cadavre is a Music performance created with an old broken piano.
By manipulating the form and sounds of the piano we managed to bring it to a different functionality than it was before , allowing to amplify it and play on it with instruments such as bows, xylophone sticks and bare hands .

Rehearsals:
We mostly played the instrument to understand what kind of movement it demands , through the rehearsals we understood that such an instrument is meant to be tuned in advance , like building a pupet , and through its behavior (piano/pupet) our work as musicians and performers is to activate the beast, make it sing its own song, through actions of the body rather than exclusively a musical goal .
Since the instrument is big and has a lot of strings, four hands are required at all times.
Narrative structures where used in order to give the performance a smooth flow.

For Example:
One metaphor we worked with is the moment pinocchio turns from wood into flesh , by developing the idea of a puppet turning from wood into flesh action emerged as well as an abstract goal of giving life to an inanimate object.
Another metaphor that was used is “autopsy” , the first movements on the piano is played with bows , the bridges for the strings that can be bowed where placed in such a way that the action we do with the bows portrays the movement of cutting wood with a saw. 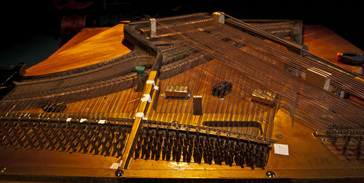 Cadavre is the harp of an old piano that couldn't be repaired , by adopting the instrument , an action of decomposition and recomposition happens to the piano , which allows me to play on it differently than on a regular piano .

the quantity of strings allow me a big range of frequencys , as well as manipulation of their form and tuning without losing to much of range .

some of the strings are bent with bridges in order to allow me to play on them bows , some are tuned the same in order to get chorus like effects and enhanced harmonics.

It is amplified with 5 guitar pickups , and the speakers are always situated either on the acoustic box or in the close vicinity . 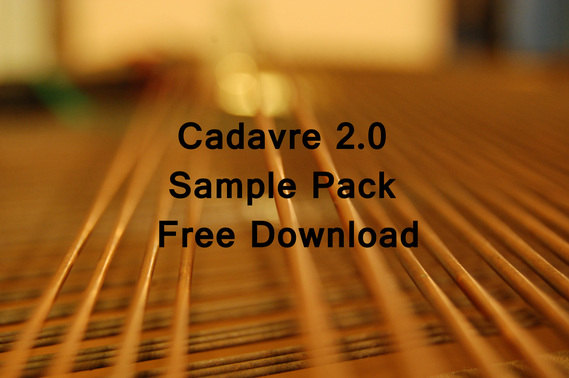